PNN and GRNN networks have advantages and disadvantages compared to Multilayer Perceptron networks:

Although the implementation is very different, probabilistic neural networks are conceptually similar to K-Nearest Neighbor (k-NN) models. The basic idea is that a predicted target value of an item is likely to be about the same as other items that have close values of the predictor variables. Consider this figure: 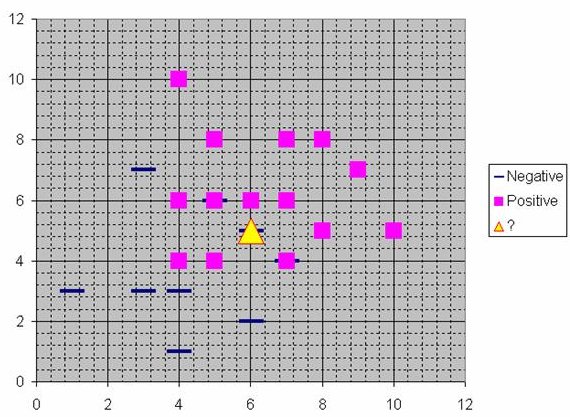 Assume that each case in the training set has two predictor variables, x and y. The cases are plotted using their x,y coordinates as shown in the figure. Also assume that the target variable has two categories, positive which is denoted by a square and negative which is denoted by a dash. Now, suppose we are trying to predict the value of a new case represented by the triangle with predictor values x=6, y=5.1. Should we predict the target as positive or negative?

Notice that the triangle is position almost exactly on top of a dash representing a negative value. But that dash is in a fairly unusual position compared to the other dashes which are clustered below the squares and left of center. So it could be that the underlying negative value is an odd case.

The nearest neighbor classification performed for this example depends on how many neighboring points are considered. If 1-NN is used and only the closest point is considered, then clearly the new point should be classified as negative since it is on top of a known negative point. On the other hand, if 9-NN classification is used and the closest 9 points are considered, then the effect of the surrounding 8 positive points may overbalance the close negative point.

A probabilistic neural network builds on this foundation and generalizes it to consider all of the other points. The distance is computed from the point being evaluated to each of the other points, and a radial basis function (RBF) (also called a kernel function) is applied to the distance to compute the weight (influence) for each point. The radial basis function is so named because the radius distance is the argument to the function.

The further some other point is from the new point, the less influence it has. 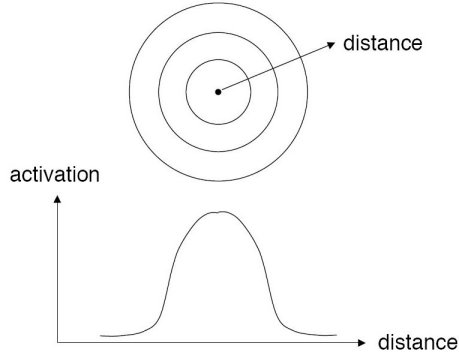 Different types of radial basis functions could be used, but the most common is the Gaussian function: 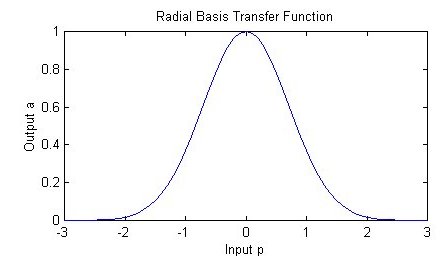 If there is more than one predictor variable, then the RBF function has as many dimensions as there are variables. Here is a RBF function for two variables: 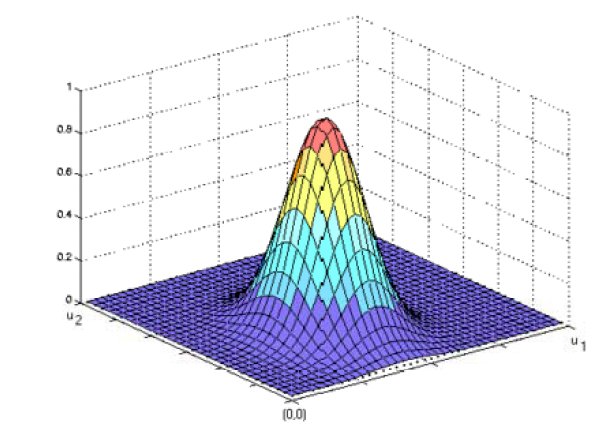 The best predicted value for the new point is found by summing the values of the other points weighted by the RBF function. 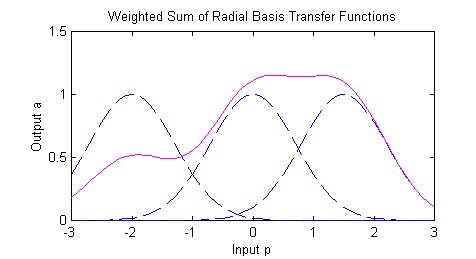 The peak of the radial basis function is always centered on the point it is weighting. The sigma value (σ) of the function determines the spread of the RBF function; that is, how quickly the function declines as the distance increased from the point.

With larger sigma values and more spread, distant points have a greater influence.

Suppose our goal is to fit the following function: 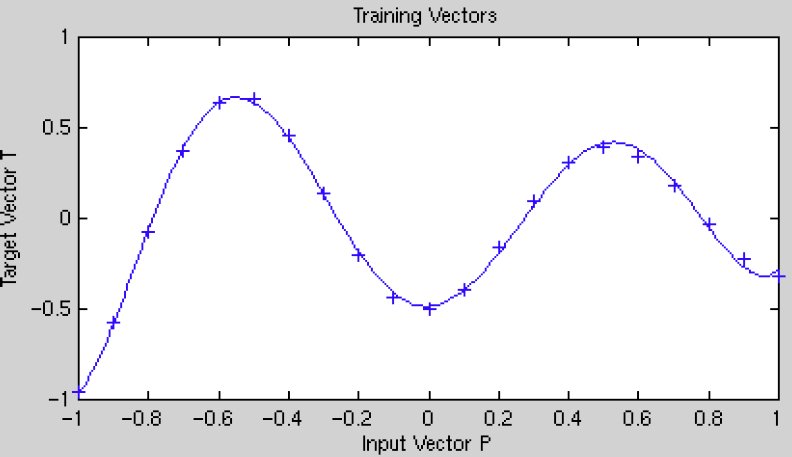 If the sigma values are too large, then the model will not be able to closely fit the function, and you will end up with a fit like this: 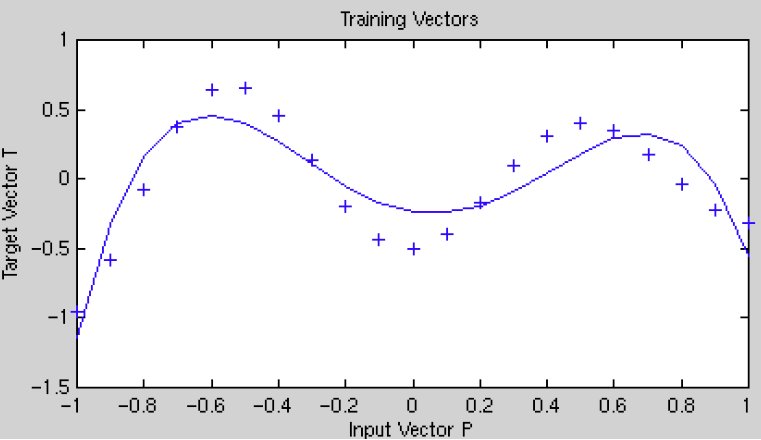 If the sigma values are too small, the model will overfit the data because each training point will have too much influence: 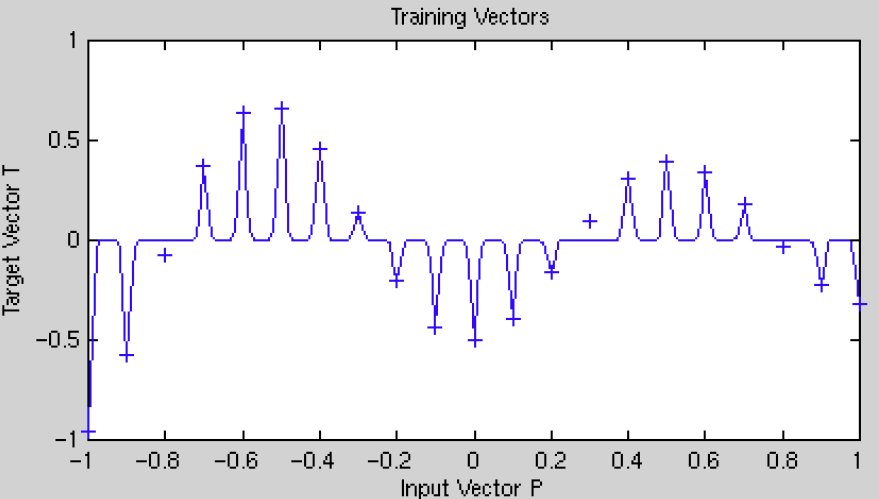 DTREG allows you to select whether a single sigma value should be used for the entire model, or a separate sigma for each predictor variable, or a separate sigma for each predictor variable and target category. DTREG uses the jackknife method of evaluating sigma values during the optimization process. This measures the error by building the model with all training rows except for one and then evaluating the error with the excluded row. This is repeated for all rows, and the error is averaged.

Architecture of a PNN/GRNN Network

In 1990, Donald F. Specht proposed a method to formulate the weighted-neighbor method described above in the form of a neural network. He called this a “Probabilistic Neural Network”. Here is a diagram of a PNN/GRNN network: 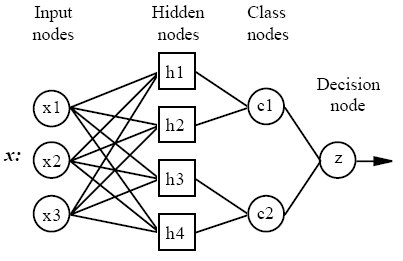 All PNN/GRNN networks have four layers:

DTREG provides an option to cause it remove unnecessary neurons from the model after the model has been constructed.

The process of removing unnecessary neurons is an iterative process. Leave-one-out validation is used to measure the error of the model with each neuron removed. The neuron that causes the least increase in error (or possibly the largest reduction in error) is then removed from the model. The process is repeated with the remaining neurons until the stopping criterion is reached.

When unnecessary neurons are removed, the “Model Size” section of the analysis report shows how the error changes with different numbers of neurons. You can see a graphical chart of this by clicking Chart/Model size.

There are three criteria that can be selected to guide the removal of neurons:

Controls for PNN and GRNN analyses are provided on a screen in DTREG that has the following image: 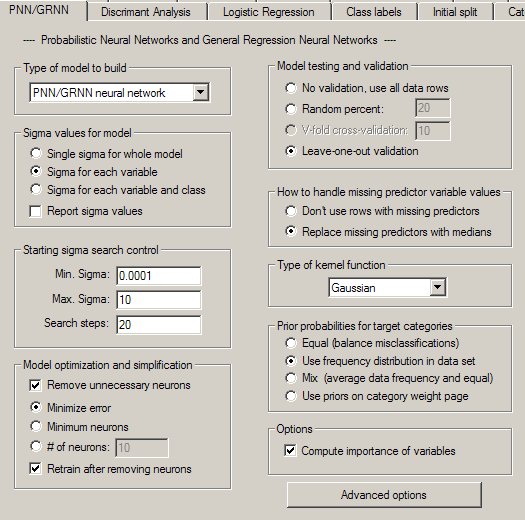