A Decision Tree Forest is an ensemble (collection) of decision trees whose predictions are combined to make the overall prediction for the forest. A decision tree forest is similar to a TreeBoost model in the sense that a large number of trees are grown. However, TreeBoost generates a series of trees with the output of one tree going into the next tree in the series. In contrast, a decision tree forest grows a number of independent trees in parallel, and they do not interact until after all of them have been built.

How Decision Tree Forests Are Created

Here is an outline of the algorithm used to construct a decision tree forest:

Decision tree forests have two stochastic (randomizing) elements: (1) the selection of data rows used as input for each tree, and (2) the set of predictor variables considered as candidates for each node split. For reasons that are not well understood, these randomizations along with combining the predictions from the trees significantly improve the overall predictive accuracy.

No Overfitting or Pruning

"Overfitting" is a problem in large, single-tree models where the model begins to fit noise in the data. When such a model is applied to data not used to build the model, the model does not perform well (i.e., it does not generalize well). To avoid this problem, single-tree models must be pruned to the optimal size. In nearly all cases, decision tree forests do not have a problem with overfitting, and there is no need to prune the trees in the forest. Generally, the more trees in the forest, the better the fit.

When a decision tree forest is constructed using the algorithm outlined above, about 1/3 of data rows are excluded from each tree in the forest. The rows that are excluded from a tree are called the “out of bag (OOB)” rows for the tree; each tree will have a different set of out-of-bag rows. Since the out of bag rows are (by definition) not used to build the tree, they constitute an independent test sample for the tree.

There are several advantages to this method of computing generalization error: (1) all of the rows are used to construct the model, and none have to be held back as a separate test set, (2) the testing is fast because only one forest has to be constructed (as compared to V-fold cross-validation where additional trees have to be constructed).

The decision tree forest option is available only in the Advanced and Enterprise versions of DTREG.

When you select the decision tree forest property page, you will see a screen like this: 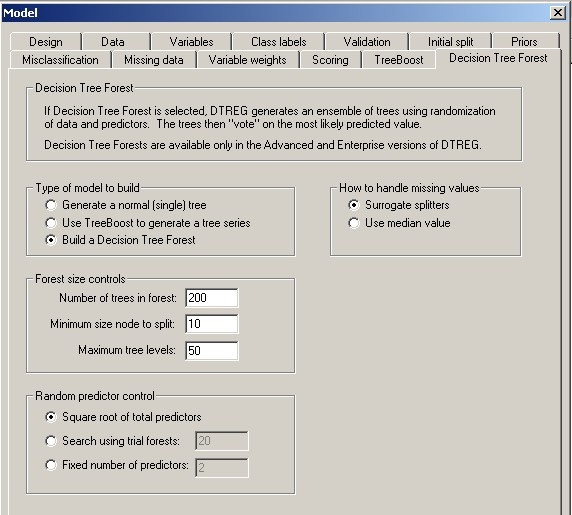 Generally, the larger a decision tree forest is, the more accurate the prediction. There are two types of size controls available (1) the number of trees in the forest and (2) the size of each individual tree.

Number of trees in forest - This specifies how many trees are to be constructed in the decision tree forest. It is recommended that a minimum value of 100 be used.

Minimum size node to split – A node in a tree in the forest will not be split if it has fewer than this number of rows in it.

Maximum tree levels – Specify the maximum number of levels (depth) that each tree in the forest may be grown to. Some research indicates that it is best to grow very large trees, so the maximum levels should be set large and the minimum node size control would limit the size of the trees.

Fixed number of predictors – If you select this option, you can specify exactly how many predictors you want DTREG to use as candidates for each node split.

How to Handle Missing Values

Use median value – If this option is selected, DTREG replaces missing values for predictor variables with the median value of the variable over all data rows. While this option is less exact than using surrogate splitters, it is much faster than computing surrogates, and it often yields very good results if there aren’t a lot of missing values; so it is the recommended option when building exploratory models.