The TreeBoost algorithm used by DTREG is optimized for improving the accuracy of models built on decision trees. Research has shown that models built using TreeBoost are among the most accurate of any known modeling technique.

The TreeBoost algorithm is functionally similar to Decision Tree Forests because it creates a tree ensemble, and it uses randomization during the tree creations. However, a random forest builds the trees in parallel and they "vote" on the prediction; whereas TreeBoost creates a series of trees, and the prediction receives incremental improvement by each tree in the series.

Mathematically, a TreeBoost model can be described as:

Where F0 is the starting value for the series (the median target value for a regression model), X is a vector of “pseudo-residual” values remaining at this point in the series, T1(X), T2(X) are trees fitted to the pseudo-residuals and B1, B2, etc. are coefficients of the tree node predicted values that are computed by the TreeBoost algorithm.

Graphically, a TreeBoost model can be represented like this:

The first tree is fitted to the data. The residuals (error values) from the first tree are then fed into the second tree which attempts to reduce the error. This process is repeated through a chain of successive trees. The final predicted value is formed by adding the weighted contribution of each tree.

Usually, the individual trees are fairly small (typically 3 levels deep with 8 terminal nodes), but the full TreeBoost additive series may consist of hundreds of these small trees.

Here are some of the features of TreeBoost:

The primary disadvantage of TreeBoost is that the model is complex and cannot be visualized like a single tree. It is more of a “black box” like a neural network. Because of this, it is advisable to create both a single-tree and a TreeBoost model. The single-tree model can be studied to get an intuitive understanding of how the predictor variables relate, and the TreeBoost model can be used to score the data and generate highly accurate predictions.

When you select the TreeBoost property page, you will see a screen like this: 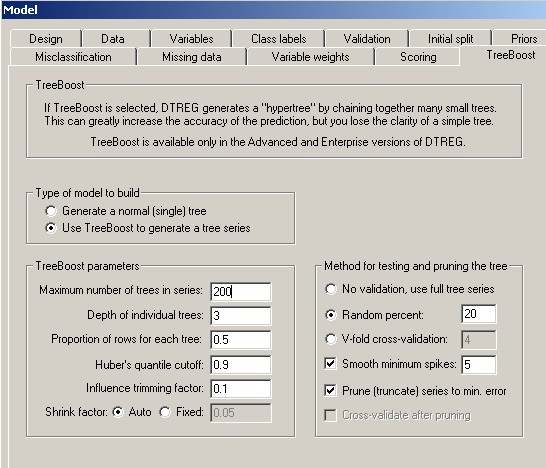 Type of model to build: Select whether you want DTREG to create a single-tree model or a TreeBoost model consisting of a series of trees. If you select a single-tree model, all of the other controls on this screen will be disabled.

Maximum number of trees in series: Specify how many trees you want DTREG to generate in the TreeBoost series. If you select the appropriate options in the right panel, DTREG will prune (truncate) a series to the optimal size after building it. You can click Charts on the main menu followed by Model Size to view a chart that shows how the error rates vary with the number of trees in the series.

Proportion of rows in each tree: Research has shown (Friedman, 1999b) that TreeBoost generates the most accurate models with minimum over fitting if only a portion of the data rows are used to build each tree in the series. Specify for this parameter the proportion of rows that are to be used to build each tree in the series; a value of 0.5 is recommended (i.e., half of the rows). The specified proportion of the rows are chosen randomly from the full set of rows. (This is the stochastic part of stochastic gradient boosting.)

Huber’s quantile cutoff: The TreeBoost algorithm uses Huber’s M-regression loss function to evaluate error measurements (Huber, 1964). This loss function is a hybrid of ordinary least-squares (OLS) and least absolute deviation (LAD). For residuals less than a cutoff point, the squared error values are used. For residuals greater than the cutoff point, absolute values are used. The virtue of this method is that small to medium residuals receive the traditional least-squares treatment, but large residuals (which may be anomalous cases, mismeasurements or incorrectly coded values) do not excessively perturb the function. After the residuals are calculated, they are sorted by absolute value and the ones below the specified quantile cutoff point are then squared while those in the quantile above the cutoff point are used as absolute values. The recommended value is 0.9 which causes the smaller 90% of the residuals to be squared and the most extreme 10% to be used as absolute values.

Influence trimming factor: This parameter is strictly for speed optimization; in most cases it has little or no effect on the final TreeBoost model. When building a TreeBoost model, the residual values from the existing tree series are used as the input data for the next tree in the series. As the series grows, the existing model may do an excellent job of fitting many of the data rows, and the new trees being constructed are only dealing with the unusual cases. “Influence trimming” allows DTREG to exclude from the next tree build process rows whose residual values are very small. The default parameter setting of 0.1 excludes rows whose total residual represent only 10% of the total residual weight. In some case, a small minority of the rows represent most of the residual weight, so most of the rows can be excluded from the next tree build. Influence trimming is only used when building classification models.

If you prefer, you can select the “Fixed” option and specify a shrinkage factor.

No validation, use full tree series: All of the data rows are used to “train” the TreeBoost series. No validation or pruning is performed.

Random percent of rows: If you check this button, DTREG will hold back from the model building process the specified percent of the data rows. The rows are selected randomly from the full dataset, but they are chosen so as to stratify the values of the target variable. Once the model is built, the rows that were held back are run through the tree and the misclassification rate is reported. If you enable tree pruning, the tree will be pruned to the size that optimizes the fit to the random test rows. The advantage of this method over V-fold cross-validation is speed – only one TreeBoost series has to be created rather than (V+1) tree series that are required for V-fold cross-validation. The disadvantage is that the random rows that are held back do not contribute to the model as it is constructed, so the model may be an inferior representation of the training data. Generally, V-fold cross-validation is the recommended method for small to medium size data sets where computation time is not significant, and random-holdback validation can be used for large datasets where the time required to build (V+1) tree series would be excessive.

V-Fold cross-validation: If you check this button, DTREG will use V-fold cross-validation to determine the statistically optimal size for the TreeBoost series. You may specify how many “folds” (cross-validation trees) are to be used for the validation; a value in the range 3 to 10 is recommended. Specifying a larger value increases the computation time and rarely results in a more optimal tree. For a detailed description of V-fold cross validation, please see page 92.

Smooth minimum spikes If you check this button, DTREG will smooth out fluctuations in the error rate for various size models by averaging the misclassification rates for neighboring tree series sizes Sometimes the error rate fluctuates as the tree size increases, and an anomalous minimum “spike” may occur in a region where the surrounding error rates are much higher. This happens more often when using random-row-holdback validation than when using V-fold cross-validation which tends to average out error rate values. If you enable smoothing of minimum spikes, DTREG averages each error-rate/tree-size value with its neighboring values. The effect is to cause DTREG to seek regions where the minimum values are consistently low rather than isolated low values. The generated TreeBoost series may be longer, but they usually are more stable when used for scoring. The value associated with this button specifies how many values are to be averaged for smoothing. For example, a smoothing value of 3 causes DTREG to compute the average of three points – the center point and the neighboring points on the left and right.