Logistic Regression is a type of predictive model that can be used when the target variable is a categorical variable with two categories – for example live/die, has disease/doesn’t have disease, purchases product/doesn’t purchase, wins race/doesn’t win, etc. A logistic regression model does not involve decision trees and is more akin to nonlinear regression such as fitting a polynomial to a set of data values. Logistic regression can be used only with two types of target variables:

As an example of logistic regression, consider a study whose goal is to model the response to a drug as a function of the dose of the drug administered. The target (dependent) variable, Response, has a value 1 if the patient is successfully treated by the drug and 0 if the treatment is not successful. Thus, the general form of the model is:

Response = f(dose) The input data for Response will have the value 1 if the drug is effective and 0 if the drug is not effective. The value of Response predicted by the model represents the probability of achieving an effective outcome: P(Response=1|Dose). As with all probability values, it is in the range 0.0 to 1.0. One common question is “Why not simply use linear regression?” In fact, many studies have done just that, but there are two significant problems:

The logistic regression dose-response curve has an 'S' (sigmoidal) shape such as shown here:

The logistic model formula computes the probability of the selected response as a function of the values of the predictor variables.

Where B0 is a constant and Bi are coefficients of the predictor variables (or dummy variables in the case of multi-category predictor variables). The computed value, P, is a probability in the range 0 to 1. The "exp" function is e raised to a power. You can exclude the B0 constant by turning off the option “Include constant (intercept) term” on the logistic regression model property page.

Summary statistics for the model

The log likelihood of the model is the value that is maximized by the process that computes the maximum likelihood value for the Bi parameters.

The Deviance is equal to -2*log-likelihood.

Akaike’s Information Criterion (AIC) is -2*log-likelihood+2*k where k is the number of estimated parameters.

The computed beta parameters are the maximum likelihood values of the Bi parameters in the logistic regression model formula (see above).  By using them in an equation with the corresponding values of the predictor (X) variables, you can compute the expected probability, P, for an observation.

In addition to the maximum likelihood value, the standard error for the estimate is displayed and the Chi squared probability that the true value of the parameter is not zero.  The last two columns display the Wald upper and lower confidence intervals.  You can select the confidence interval percentage range on the Logistic Regression property page.

If a predictor variable is categorical, then a dummy variable is generated for each category except for one.  In this case, there is a Bi parameter for each dummy variable, and the categories are shown indented under the names of the variables like this: 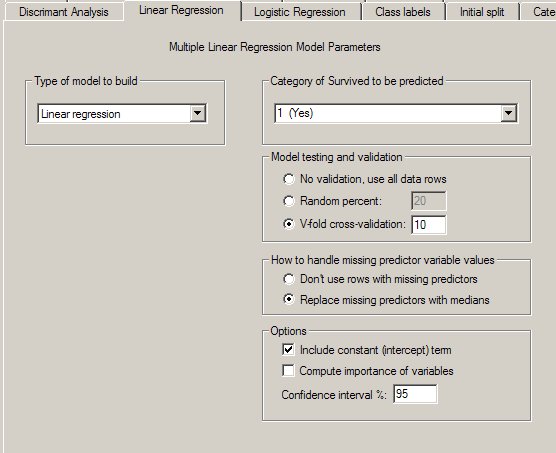