Group Method of Data Handling (GMDH) polynomial neural networks are “self organizing” networks. The network begins with only input neurons. During the training process, neurons are selected from a pool of candidates and added to the hidden layers.

GMDH networks were originated in 1968 by Prof Alexey G. Ivakhnenko at the Institute of Cybernetics in Kyiv (Ukraine).

Structure of a GMDH network

GMDH networks are self organizing. This means that the connections between neurons in the network are not fixed but rather are selected during training to optimize the network. The number of layers in the network also is selected automatically to produce maximum accuracy without overfitting. The following figure from Kordik, Naplava, Snorek illustrates the structure of a basic GMDH network using polynomial functions of two variables: 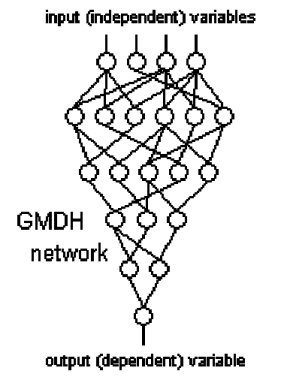 Inputs to neurons in GMDH networks can skip layers and come from the original variables or layers several layers earlier as illustrated by this figure: 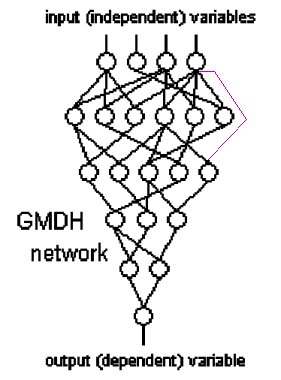 In this network, the neuron at the right end of the third layer is connected to an input variable rather than the output of a neuron on the previous layer.

Traditional GMDH neural networks use complete quadratic polynomials of two variables as transfer functions in the neurons. These polynomials have the form:

DTREG extends GMDH networks by allowing you to select which functions may be used in the network.

If you are running on a multi-core CPU system, DTREG will perform GMDH training in parallel using multiple CPU’s.

In addition to the usual information reported for a model, DTREG displays the actual GMDH polynomial network generated. Here is an example:

Output from neuron i is shown as N(i). Categorical predictor variables such as Sex are shown with the activation category in braces. For example, “Sex{Male}” has the value 1 if the value of Sex is “Male”, and it has the value 0 if Sex is any other category. The final line shows the output of the network. In this case, the probability of Survived being Yes is predicted. Note how the inputs to each neuron are drawn from the outputs of neurons in lower levels of the network. This example uses only two-variable quadratic functions.