Cascade correlation neural networks (Fahlman and Libiere, 1990) are “self organizing” networks. The network begins with only input and output neurons. During the training process, neurons are selected from a pool of candidates and added to the hidden layer. Cascade correlation networks have several advantages over multilayer perceptron networks:

As with all types of models, there are some disadvantages to cascade correlation networks:

A cascade correlation network consists of a cascade architecture, in which hidden neurons are added to the network one at a time and do not change after they have been added. It is called a cascade because the output from all neurons already in the network feed into new neurons. As new neurons are added to the hidden layer, the learning algorithm attempts to maximize the magnitude of the correlation between the new neuron’s output and the residual error of the network which we are trying to minimize.

Input Layer: A vector of predictor variable values (x1…xp) is presented to the input layer. The input neurons perform no action on the values other than distributing them to the neurons in the hidden and output layers. In addition to the predictor variables, there is a constant input of 1.0, called the bias that is fed to each of the hidden and output neurons; the bias is multiplied by a weight and added to the sum going into the neuron.

Hidden Layer: Arriving at a neuron in the hidden layer, the value from each input neuron is multiplied by a weight, and the resulting weighted values are added together producing a combined value. The weighted sum is fed into a transfer function, which outputs a value. The outputs from the hidden layer are distributed to the output layer.

Initially, a cascade correlation neural network consists of only the input and output layer neurons with no hidden layer neurons. Every input is connected to every output neuron by a connection with an adjustable weight, as shown below: 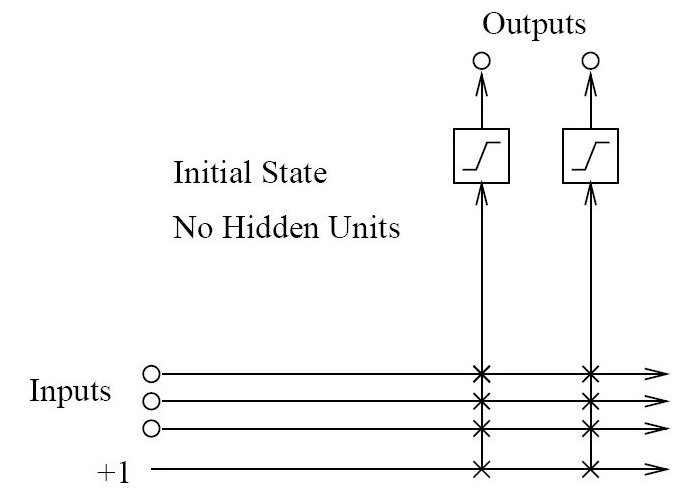 Each ‘x’ represents a weight value between the input and the output neuron. Values on a vertical line are added together after being multiplied by their weights. So each output neuron receives a weighted sum from all of the input neurons including the bias. The output neuron sends this weighted input sum through its transfer function to produce the final output.

After the addition of the first hidden neuron, the network would have this structure: 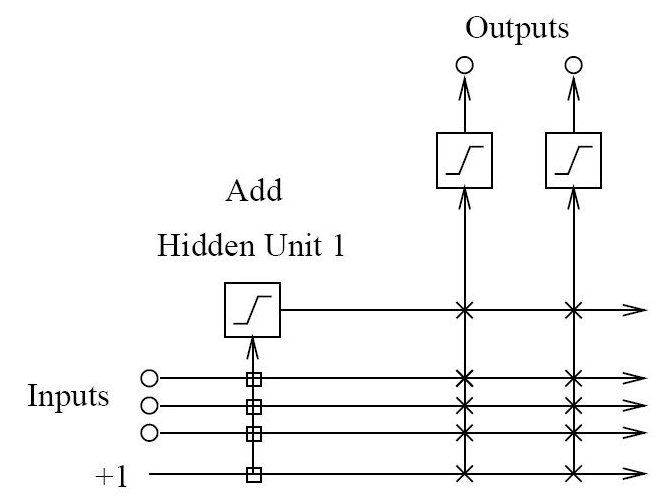 The input weights for the hidden neuron are shown as square boxes to indicate that they are fixed once the neuron has been added. Weights for the output neurons shown as ‘x’ continue to be adjustable.

Here is a schematic of a network with two hidden neurons. Note how the second neuron receives inputs from the external inputs and pre-existing hidden neurons. 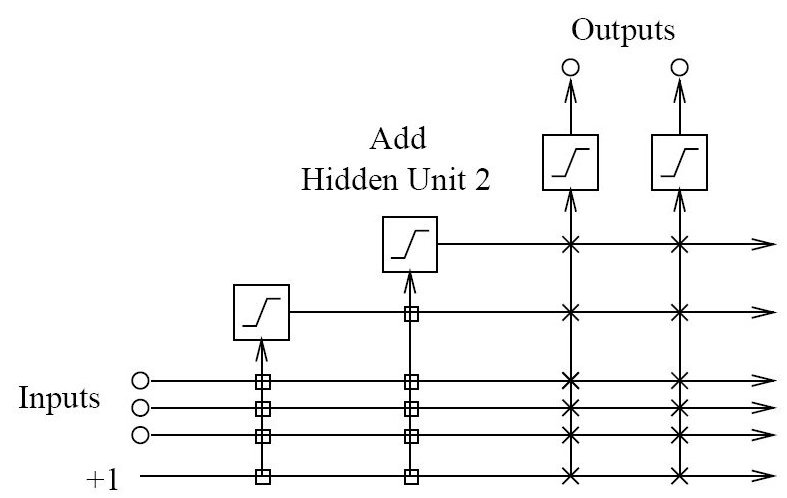 Controls for cascade correlation analyses are provided on a screen in DTREG that has the following image: 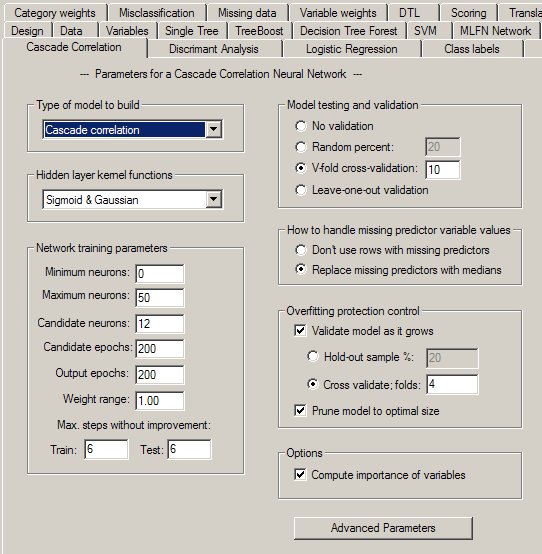